Hello, fellow CFSA Esquimalt members and visitors.  Below is a time line to remind us how we got to be the great club we are today.

1946/47 – Club is organized as Royal Canadian Naval Yacht Club (West Coast) with 12 “Snipe” class sailboats.  Started by some keen sailors of all ranks with a boat building project on the jetty below Naden barracks using space in the Ordinance School.

1953 – Club reformed as RCNSA (Royal Canadian Sailing Association) by Order in Council P.C.63/1525, “for the purposes designed to further the Defense of Canada.  Approved by the Governor General of Canada on March 17th, 1952. 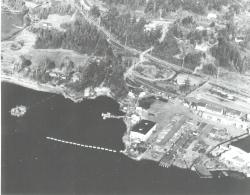 1968 – With integration of the three branches of the military RCNSA lost both “Royal” and “Naval” designations and became Canadian Forces Sailing Association, Esquimalt Squadron, CFSA (E). 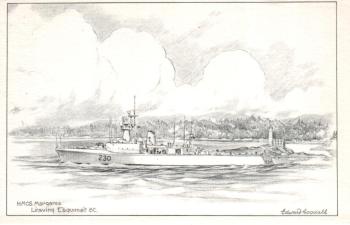 Esquimalt means “the place of shoaling waters” For those not familiar with our harbour, Esquimalt is located on the southern tip of Vancouver Island approximately 1 nm west of Victoria, BC on the wonderful sailing waters of The Strait of Juan de Fuca. Esquimalt Harbour’s inhabited history goes back many thousands of years. The original inhabitants were Coast Salish peoples who called it “Is-whoy-malth” referring to the flats at the head of the harbour near the mouth of what we now call Mill Stream. It was an important place to the early inhabitants as it was a source of fresh water.There has long been a native village located between Ashe and Munro head, where the Esquimalt people still live today. The Songhees people relocated to the area in 1911 from the west shore of Victoria’s Inner Harbour. The next visitors were the Spaniards with Manuel Quimper who, on July 19,

1790, sailed the Princess Real into Esquimalt Harbour and anchored for the night. He named the harbour “Puerto de Cordova” after 46th in the long line of Viceroys of New Spain. Quimper also placed a cross at what we now call Albert Head and taking possession of the entire area for Spain and called the area north of him “Valdez y Bazon–or Royal Roads. Other Spanish names that visited Esquimalt and still live on in our geography are: Galiano, Valdes, Santa Saturiana.

The Hudsons Bay and Royal Navy

It was over 50 years between the departure of the Spanish explorers and the arrival of The Husdons Bay and Sir James Douglas. In deciding between Victoria (Cmosack), Esquimalt (Is-whoy-maht) and Sooke (Sy-yousung) he had this to say about Esquimalt : “Is-whoy-malth…is one of the best harbours on the coast….being of safe and easy access, but in other respects is possesses no attractions.”In 1845 two British Army officers of the Royal Engineers visited Fort Victoria and explored “Squimal Harbour” and had to say “very commodious, and accessible at all times, offering a much better position (than Victoria), and having also the advantage of a supply of water in the vicinity”.The Royal Navy and Hudsons Bay shared use of Esquimalt harbour for many years. Three large farms operated by the “Puget’s Sound Agricultural Company” (a subsidiary of the Hudsons Bay Company) operated in the area from the mid-1800′s through to the 1930′s when the land was claimed by the municipality for unpaid taxes.

RN Ships at anchor looking north in Esquimalt Harbour, circa early 1900′s and over to where CFSA is today. 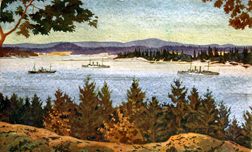 The Royal Navy was a large presence in Esquimalt Harbour until 1910 when the Royal Canadian Navy was born. Many of the names we still hear in our place names came from those times and ships. Naden, Trincomalee, Fisgard, Cormorant, Pandora, Constance, Thetis, come from this Royal Navy time.

Our sailing club was originally organized just after World War II in 1946/47 as the “Royal Canadian Naval Yacht Club (West Coast)” by a small group of keen sailors of all ranks who had started a boat building project on the jetty below Naden, using the space in the ordinance buildings. Twelve “Snipe” class vessels were constructed and actively sailed in the lower Vancouver Island area by members and their friends.

Sailors, being very resourceful people, it wasn’t long before the acquisition of bigger craft was being pursued. Ted Finch-Noyes, and enthusiastic, dedicated sailor was busy behind the scenes in Naval Headquarters and in 1949 a contract to build three “Sailorette” class sloops was let to Sailboat Specialties Ltd., a boat builder at Maple Bay owned by Hunter Vogel. Hunter built the Blue Goose, White Swan and Red Start but unfortunately the contract wasn’t completed before Sailboat Specialties went out of business and had to close. The Red Start was moved to the Shipwright Shop in Dockyard for completion in 1950. Three others, Black Hawk, Green Teal and Silver Heron were built in 1951/52 at Foster Shipyard, Victoria. Later, a seventh, Golden Gull was built by the apprentices at Dockyard.

In 1954 a space was found to house the growing club at Munro Head in the ex-supply section off ices. This clubhouse, vastly modified and improved by members over the years, still stands as the clubs headquarters in Esquimalt today. The result of Ted Finch-Noyes’ leadership in forming a coast-to-coast association for sailing people occurred when the RCNSA (Royal Canadian Sailing Association) was officially formed in 1953 by Order in Council P.C.63/1525, “for the purposes designed to further the Defense of Canada”. 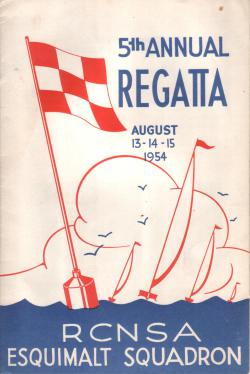 The RCNSA National Constitution included the proviso that Canadian Yachting Association (CYA) standards would be adopted for all training.

By that time the originally fleet of Snipes and Sailorette class sloops grew to include several “Cub” class sloops along with many and varied sailing dinghies, and eventually privately owned sail boats. Moorage at the club began with all boats being on buoys anchored just off the clubhouse with only a small wharf on the foreshore, but over the years the clubs wharfs have been constructed and added to by club volunteers to meet the needs of it’s members.

The original breakwater, was a line of “surplus” World War II naval vessels, replaced in the early 1960′s by a line of anchored navy “cans” before the installation in 1979 of large caissons.

In 1968 with the integration of the three military branches, RCNSA lost both it’s “Royal” and “Naval” designation and became Canadian Forces Sailing Association. CFSA then consisted of several Base sailing squadrons across Canada administered by a Central Committee in NDHQ and operated under the auspices of CFAO 50 – 5, Canadian Forces Sailing Associations (CFSA) (Cancelled March 1994). This CFAO provided direct public support in the form of boats and equipment to conduct training as well as some support for facilities. The individual Squadrons developed in various ways based on the location of their activities and the interest of Bases and volunteers to support their operations. 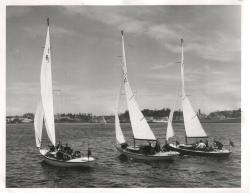 The CFSA became one of the leading sail training operations in Canada. CFSA Esquimalt was in the unique situation of being the only Squadron in Canada that could provide year round training and had access to excellent water and shore facilities. This enabled it to operate as a support facility to the greater Victoria Military Community and it families. In the early years the club was operated as an independent facility outside of the Base Non Public Funds auspices. All activities at the club, including most of the maintenance of its facilities, was carried out by a core of dedicated volunteers. In 1988 the Base Commander decreed that, while the training function would remain supported by the public under CFAO 50-5, the rest of its functions such as club operations, membership and moorage would be brought under Base Fund management as a Base Recreational facility. In the early 1990′s when the Navy dropped sailing as part of its seamanship training the need for direct public support to CFSA’s was no longer deemed necessary. As a result CFAO 50-5 was cancelled in March 1994. As a result, the CFSA Central Committee was disbanded and individual Squadrons were directed to fully integrate into Base NPF management. 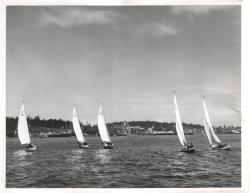 Over the past 61 years our club has hosted a vast array of on the water events. From Sea Cadet regattas, to “Cock-of-the-Walk” competitions between Canadian and visiting ships, to fleet whaler races on New Years Day and both the CISM Canadian and World Sailing Championships. In support of the Victoria and Esquimalt community we have become home to the Victoria Chapter of the Disabled Sailing Association and proudly display two Para-Olympic medals won by these awesome sailors in the clubhouse. In only the past few years we have hosted or co-hosted the Thunderbird National and International Sailing Championships, the TSAR World Sailing Championships, a Europe Class Olympic qualifying regatta. This May we are on track to co-host the Fireball World Sailing Championships in May of this year. All done by volunteers who love to sail, and love to support our club. Our sailors can always be counted on to compete in all major sailing events in the lower Vancouver Island area. We have had boats entered in every Swiftsure race ever raced, and most other city wide events such as the Classic Boat Festival or Tall Ships Festival and the annual Easter Seals Festival of Boats will normally find CFSA members helping with the organization or on the start line as race committee. 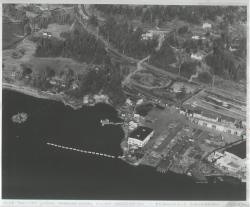 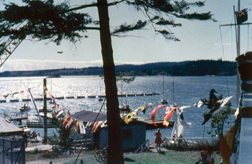 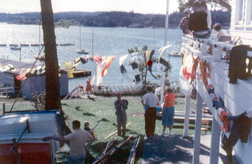 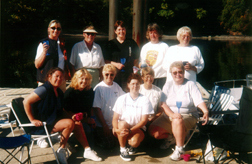 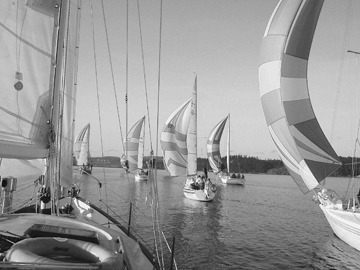 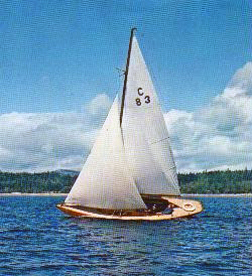 2 photos are the surplus WWII corvettes in the background which were our original breakwater.

Of course there are many out there with much more pictures, stories, legends, items … everything welcome, we would all love to see and read about. Please feel free to forward anything you think may be of interest to communications at cfsaesq dot ca

This historical perspective is an ongoing “work in progress”. Please check back again soon to see what is “new in being old”. Looking for more on Esquimalt’s history right now? Visit the Township of Esquimalt’s web page, and the CFB Esquimalt Museum’s great site for more information.